As a business continually driving values for its stakeholders, Dangote Cement is to empower stakeholders in the value chain of Palm Kernel Shell (PKS) supply as part of its strategies to shore up and sustain its availability as a waste that is co-processed in the cement kiln in order to recover energy.

This, the cement manufacturer, said is part of its contribution to the global environmental preservation efforts and circular economy.

To this end the company has instituted periodic value chain analysis and community engagements with the waste (PKS) collectors as well as the palm oil millers in communities across Nigeria to explore avenues to empowering them to bolster production which in effect will lead to sustainable generation of PKS to be co-processed in the cement kilns, leaving zero waste.

A team from Dangote Cement led by the Head, Alternative Fuel Project, Engr. Peter Anagbe and Head, Sustainability, Dr. Igazeuma Okoroba was at one of the farm settlements in Ikire, in Irewole local government area of Osun State where PKS are sourced to ascertain the needs of the community and ways through which the company can empower them.

Engr. Anagbe told the community that Dangote Cement was desirous of ensuring sustainable collection of waste materials in the form of PKS, as a means of improving the environment and an addition to the source of livelihood for them.

He urged the people to always look at alternative value-adding opportunities to waste in whatever they are doing taking a cue from the PKS which hitherto was a waste which is openly incinerated, causing environmental pollution.

He lamented that the process of palm oil production, which in turn generates PKS waste, is a very tedious one and would appreciate any support from Dangote Cement for them to acquire modern machines to process the palm oil and in turn, generate the PKS.

The entire process of getting PKS from the harvesting of palm tree, he disclosed, involves as much as 30 people depending on the volume of the palm tree being harvested.

Elder Adekunle expressed gratitude at the gesture of the management of Dangote Cement noting that the cement company was the first to pay them a visit and show empathy saying “this means Dangote cement values us as a critical stakeholder in the value chain of ensuring zero waste-to-landfill by evacuating the waste palm kernel shell (PKS).

Earlier, the Dangote team met with the various stakeholders within the Ikire hub, during which the actors in the value chain enumerated the challenges faced by them while trying to collect the waste from different locations. 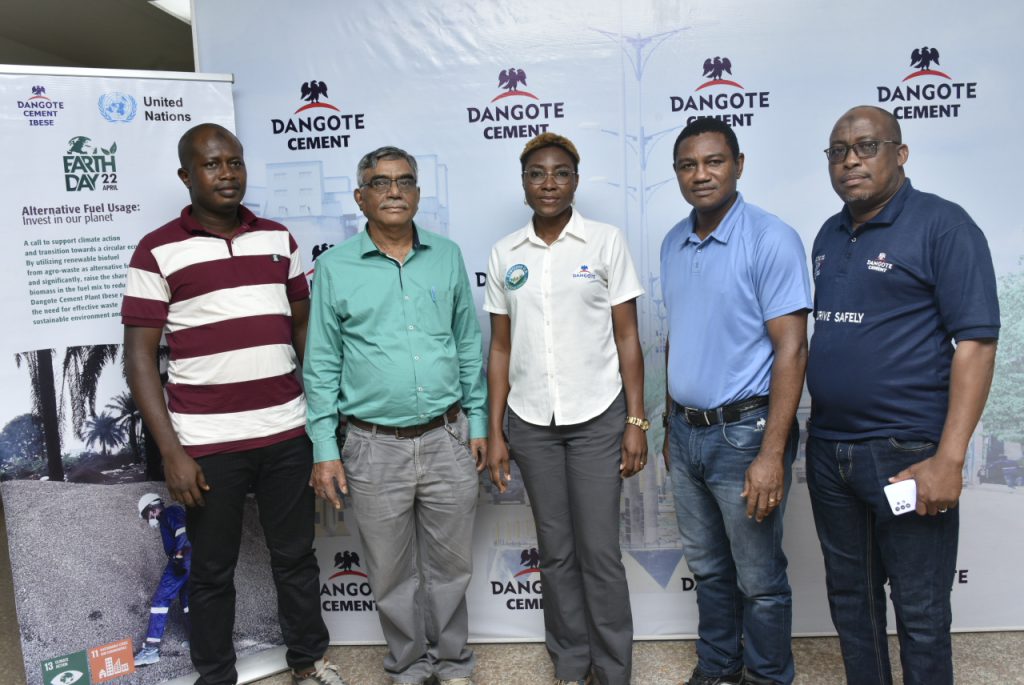 According to one of them, Prince Oloyan Lawal, a general challenge faced by them is the issue of logistics as they have to move from one settlement to the other to collect the waste and the settlements are usually not motorable.

Speaking on behalf of others, he thanked the Dangote Cement team for coming to enlightening them the more on waste management and the benefits inherent in the value chain. He stated that most of them are farmers and that the value exchanged for the waste (PKS as a by-product of palm oil) collection is seen as a part time activity and given the enlightenment by Dangote Cement team, they would devout more attention to the activity.

Engr. Anagbe and Dr. Igazeuma urged the stakeholders to have an open mindset towards a circular economy as most of the materials which are dumped as wastes are now sources of waste-to-wealth which goes a long way to improve the environment as well as the economy of the rural dwellers.

They assured that Dangote Cement would partner with them to ensure that they reap the desired benefits from the culture of turning waste to wealth and protecting the environment.

The team later headed to Ibese cement plant on a tour of the Alternative Fuel Pneumatic Feeding System and the PKS storage area. The feeding system was fabricated and assembled in-house, using obsolete equipment that were recycled. The feeding system systematically dozes the PKS into the calciner of the cement kiln, where the waste is co-processed at high temperatures, leaving zero waste and emissions.

Acting Ibese Plant Director, Mr. Myneni Nageswara, who received the team members, thanked them for its efforts at ensuring that Dangote Cement is not left behind in the global efforts at providing alternative fuel sources to traditional fossil fuel, thereby mitigating the impact of emission and conserving energy.

He particularly praised the Ibese team for a job well done in the fabrication of the Pneumatic Feeing system which uses the PKS to thermally substitute the heat energy required by the kiln in the cement making process. He urged management to fast-track installation of additional feeding systems to increase the waste co-processing capacity of the plant.

Engr. Anagbe explained that the visit was necessitated by the shift in global attention to alternative fuel sourcing, which is expected to contribute to the realization of ‘zero emission’ and ‘zero waste’ concepts. He added that alternative fuel can be produced from other agricultural wastes, municipal wastes, commercial and industrial wastes, thereby contributing to minimize waste to landfills.

Lagos State governor, Babajide Sanwo-Olu, has commended the Dangote Group for situating the biggest investment in the country in Lagos State…