As a demonstration of its commitment to human capital and infrastructural development of its host communities, leading Cement manufacturer, Dangote Cement Plc has signed a new refined five-year…

As a demonstration of its commitment to human capital and infrastructural development of its host communities, leading Cement manufacturer, Dangote Cement Plc has signed a new refined five-year Community Development Agreement (CDA) with its Ibese plant host communities.

In what was described as a novel idea, the decision to sign the agreement in full glare of the public, management of Dangote Cement, Ibese plant said the move was to underpin the fact that the company was irrevocably committed to the wellbeing of the residents in all the communities.

The Dangote Cement, Ibese Plant Director, Mr. Azad Nawabuddin explained that the signing of the CDA is the beginning of a new dawn both for the Company and the host communities in the execution of the laid out social investment projects under the company’s Corporate Social Responsibilities (CSR) activities. 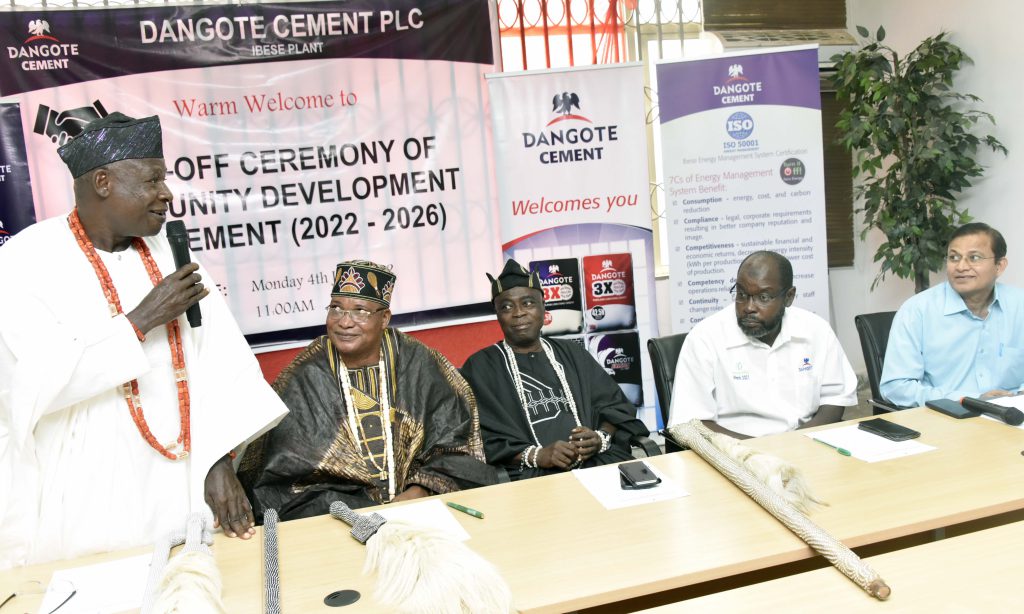 According to him, the CDA specifies Dangote Cement, Ibese Plant’s commitment to building infrastructural projects for the socio-economic development of the host communities which are well deserving.

“This occasion is a demonstration of our commitment to the development and overall well-being of our host communities and their people, as a responsible corporate entity. It also provides an opportunity to renew and refresh existing partnership between Dangote Cement and its major stakeholders in complementing the effort of the Government in nation-building.

“Dangote Cement Plc, Ibese Plant signed the first Community Development Agreement with its host communities in 2013. This marked the beginning of concrete infrastructural and social supports in the areas of Employment, Education, Health, Training and Empowerment, Road, Portable Water, Electrification and so on, that have contributed immensely to improving the standard of living in our communities.

“The new CDA is an improvement as it is fashioned to surpass previous performance through positive impact on the various stakeholder groups, especially the vulnerable in our communities. In putting this together, we had applied all the lessons learnt during the implementation of the former and thoroughly engaged with the different stakeholder groups across the now seventeen (17) host communities, with the guidance of the Federal Ministry of Mines and Steel Development.

“The document clearly states the consultative framework for engagements, grievance management and obligations of both the Plant and the host communities for mutual growth and development. It is clearly a path to define relationships, commitments, obligations and expectations with potential to address immediate concerns and future social issues that may arise in the relationship between the Plant and our host communities, once all parties are committed to its full implementation.”

Nawabuddin then expressed the appreciation of the management to the royal fathers of the host communities who appended their signatures to the CDA, for the peace and tranquility in the communities which has helped the Company to operate unhindered though there were occasional disagreements but which were quickly resolved in the best interest of all parties.

The Plant Director, while promising that Dangote Cement is committed to the fulfilment of all its obligations as stated in the agreement, he requested the host communities to “keep your end of the bargain by supporting and collaborating with us to foster all round development. Be assured that we are always ready to listen, dialogue and resolve all concerns.”

One after another the traditional rulers and other communities’ leaders took turn to comment of the CDA, especially on the transparent nature of the drafting and the public signing and expressed their satisfaction with the fresh agreement that will accelerate socio-economic development of their domains.

Speaking at the ceremony, the Olu of Aga-Olowo, Oba Kayode Adio Kusoro expressed his community’s appreciation to the management of Dangote Cement for its warm reception and commitment to its CSR for the host communities. 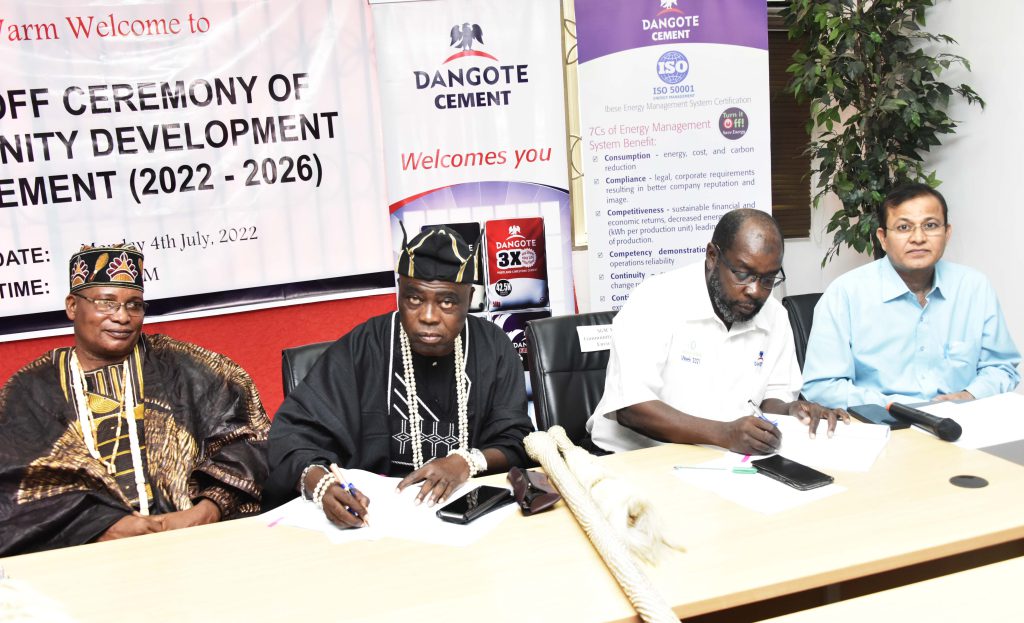 While commending the company’s openness and transparency in the all-inclusive agreement signing process, the monarch, however, expressed the hope that the company will keep faith with the letters of the agreement.

In his own assessment of the event, the Olu of Imasayi, Oba Lukmon Olalekan Adeleke Kuoye, said that the signing of the new agreement was a clear departure from the past exercises as all the representatives of the host communities and stakeholders were involved in the review and signing of the fresh agreement.

In his own remark, the Aboro of Iboroland, Oba Daniel Abayomi Salako expressed his satisfaction with the fresh agreement which he considered to be better and more inclusive that the previous ones. Said he, “This CDA is good for us all. Though the fresh agreement is limited to the existing seventeen host communities and cannot cover the entire Yewaland for now but it is subject to future amendments that will conceive legacy projects for the benefits of the people of Yewaland”.

The monarch reiterated the fact that Dangote Cement, Ibese, at the moment carries out its CSR in line with the Nigerian standard limiting its community development activities to the host communities.

While appealing to Yewa communities not captured in the current 5-year agreement to be patient with the company, Oba Abayomi was full of gratitude to the cement company for keeping faith with its Corporate Social Responsibilities to the host communities.

The Awijako of Ijako Orile, Oba Rev. Mathew Alabi Ewedairo, in his own comment, expressed the fact that the signed document was intended to accelerate socio-economic development of the host communities and that he has unflinching trust and confidence in the management of Dangote Cement Plc, Ibese to live up to their promises as contained in the agreement.

With the signing of the fresh agreement, each of the host communities will, within the next five years, (2022-2026) be entitled to specific projects that will add value to the lives and livelihood of their people.

The ceremony, which held at the Ibese plant of the company also had in attendance , Head Community Affairs and Environment, Dangote Cement, Engr. Tukur Lawal; the representatives of the Minister of Mines, Mr. Raphael Abdulai; and Ogun State Government, Chairman of Yewa-North Local Government Area, Hon. Ogunyomi Oluwole; the traditional rulers & Baales of the host communities of Ibese, Iboro, Imasayi, Aga-Olowo, Onigbedu and Ijoko-Orile, etc, as well as members of the Joint Consultative Committee, women and youth leaders.

Lagos State governor, Babajide Sanwo-Olu, has commended the Dangote Group for situating the biggest investment in the country in Lagos State…